Germany is in the middle of a heated political debate about its foreign policy. The comparison of the polling data from autumn 2021 and June 2022 shows that there has been a shift towards a more robust defence policy, including an increase in the military budget; a stronger endorsement of Ukraine’s membership in the EU; and a stronger support of a visionary idea of a European Army.

The public clearly endorses the government’s »Zeitenwende« policy, in terms of an increase in military spending, ongoing assistance to Ukraine and sacrifices in living standards to reduce dependencies from Russia.

The »Zeitenwende« has not changed Germany into a completely different state. There is continuity in public opinion when it comes to pragmatism and pacifism. The scepticism towards military means has even strengthened since the beginning of the war. Value-based foreign policy is supported by Green voters, but in the general public the interest-based and pragmatic approach of cooperating even with countries that are not like-minded prevails. Peace remains a strong priority for an overwhelming majority of polled Germans.

Differences between citizens in East and West Germany, as well as between supporters of different political parties are glaringly obvious. The divisions in the government between the position of Green voters and those of the SPD and the FDP could make the formulation of common positions more difficult. 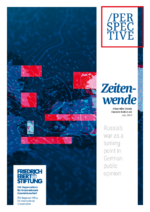