We are witnessing cracks within alli­ances that were not apparent just ten years ago. Who could have predicted that the US of all coun­tries would take a critical view of NATO’s continued existence? Who could have guessed that populist governments would open up enormous rifts between individual states within the EU? And who could imagine that states such as Belarus would be thinking out loud about refusing to pledge their powerful neighbour Russia their guaranteed allegiance in all areas?

Alliances regarded as stable and designed to last into the distant future have suddenly begun to waver. Short-term interests seem to rule: most countries want to keep their options open. Alliances are becoming fluid. How can the EU and its member states secure their future in such a security policy maelstrom? 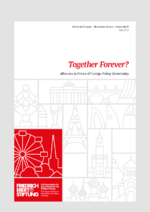