We keep hoping to learn from history. Thus it is not surprising that discussions of the future of a reformed or even new European Security are usually based on resets of old models. But that approach is no longer sufficient. Contemporary challenges need contemporary answers. A 2.0 version of the Vienna congress, Yalta or Helsinki won’t work. 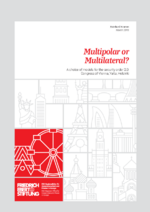 A choice of models for the security order 2.0: Congress of Vienna, Yalta, Helsinki
Wien, 2018