A three-year monitoring process of Eurasian integration concludes: The EU’s rejectionist stance towards the Eurasian Economic Union is untenable and harms its own interests and the interests of its neighbouring countries.

Instead, technical dialogue between the EU and the Eurasian Economic Union needs to be intensified and institutionalised. It can revolve around harmonisation of technical standards and have a long-term goal of an (asymmetrical) free trade agreement. Such dialogue consists of non-ideological matters, does not require a high-level partnership and does not contradict Russia sanctions.

EU’s current “wait and see” approach may entail that other actors take the lead in the region (mind rising China). If the EU indeed prioritises the EU-Asia connectivity, wants to live up to its own expectation of “Weltpolitikfähigkeit” and generally decides to take a more active stance in the Eurasian neighbourhood, it should naturally reach out to the Eurasian Economic Union. In doing so, the EU should keep in mind that 1) dialogue is not a reward for good behaviour – we need it precisely when we have frictions; 2) the Eurasian Economic Union is not only Russia. 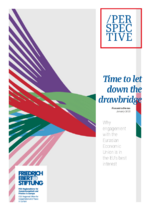 Time to let down the drawbridge

Why engagement with the Eurasian Economic Union is in the EU's best interest
Wien, 2020